Entries for the RHS Early Daffodil competition at Westminster were much reduced by this years inclement weather.

The best bloom in the show was awarded to Queen’s Guard  exhibited by Nial Watson from Northern Ireland.

A pixie from Wales was the surprise show stealer! Avon bulbs brought along a display of some historic varieties that much enhanced the show
and this vase of  Welsh Pixie, a form of pseudo narcissus was a favourite with visitors.
Christine Skelmersdale put together an educational display of all the daffodil divisions.

There was also a sweet smelling and colourful display pf hyacinths filling the showbench beautifully.
Congratulations to Adrian Scamp for an immaculate stand of 86 varieties arranged in vases of 9 flowers
which won a gold medal for Quality daffodils. All 13 divisions of daffodils were present on the stand and sales table.
A well deserved reward for the 52 hours it takes to execute the exhibit from field to exhibition hall. 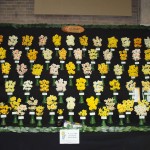 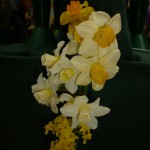 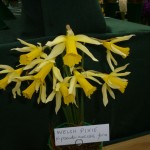 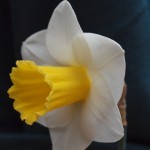