The 28th Wessex Group Show at its usual venue at Henton in Somerset, was an event that everyone seemed to enjoy even more than usual this year. Our senior judge, James Akers MBE, had his work cut out in the six championship classes though, which contained 141 vases between them, most of which James patiently pointed. 28 exhibitors in total which, without looking at old results, I believe was a record number of exhibitors.

The quality of all the exhibits was very high, especially in the Wessex Championship class requiring 6 vases covering all Divisions 1-4.

We have a new Champion this year (About time, I can hear you thinking !), winner of the Society Gilt Medal was a really excellent exhibit put up by Ivor Clark, with: Sun Bronze 2Y-O; Moon Shadow 3W-GWW; Cool Crystal 3W-GWW; Disquiet 1Y-Y; Tasgem 4Y-Y; and Touchdown 2W-P. Ivor’s Cool Crystal was Best Div.3 bloom and also Reserve Best Bloom in show. 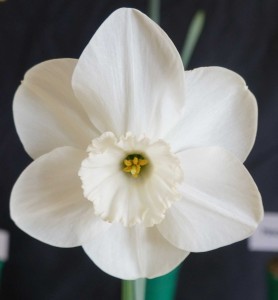 Erica Pickard was Second, which out of 9 entries was a commendable result for a novice exhibitor. Derek Phillips scraped a Third Place, although his exhibit did contain the Best Div.1 bloom Ombersley 1Y-Y, and Best Div.2 bloom Banker 2Y-O. This Banker was also the Best Bloom in the show. 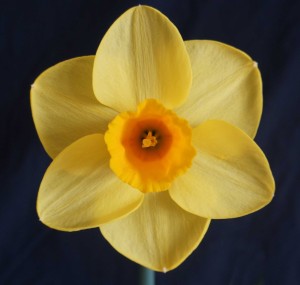 The Society Bronze Medal for the Best Exhibit in Championship classes 2-5, also went to Ivor for his 3×3 vases of: Samsara 3Y-YRR; Touchdown 2W-P; and Fireblade 2Y-YYO.

The Touchdown in this class were also awarded Best Vase of three blooms in the show. Second in the 3×3 Divs.1-4 was Derek Phillips; Third was Ken Pickard another novice exhibitor, fast leaving father Eric Pickard behind. Also in this class was Best Div.4 bloom Gay Kybo 4W-O from a vase of three shown by Richard Patrick.  7 Entries. 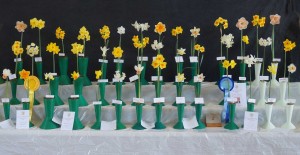 The Society Silvered Medal for most points in the show was won by Chris Yates for a terrific contribution in terms of number of entries in the show including of course a selection of his wonderful seedlings.

There were multiple entries in 44 of the remaining 46 classes, mostly for single blooms. Chris Yates picked up four of the Section Winners rosettes for most wins in:- Div:1, Div:2, Div:3, and the Misc classes. Derek Phillips picked up two rosettes, for Div: 4, and the Miniature classes (Yes miniatures, you did read that correctly). Evelyn Jane won the Divs:5-13 section. Also in these classes was to be found the Best Miniature Pixie’s Sister 7Y-Y shown by Basil Billinger.

A new team from Henton GC provided the much loved Bacon Rolls in the morning, and the support from the garden Club Members generally is as ever appreciated. The Best Exhibit in the Local Classes went to an unnamed double exhibited by David Heath.

Thanks too, to James and Wendy for travelling so far to judge the show, to Gwynne Davies for taking on the often thankless task of Show Secretary, and to all my friends, family and exhibitors who unfailingly turn up to put the show up and then clear the hall afterwards. Without your support the show couldn’t happen.
Derek Phillips
Show Manager.