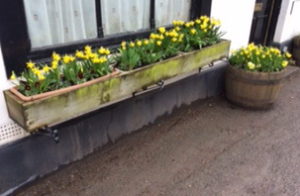 Tete a Tete miniature daffodils are blooming everywhere! Short and weatherproof they seem to have become the favourite for municipal planting schemes, narrow garden borders and pots and troughs. The small starry flowers are bright and cheerful and often throw several stems from one bulb. 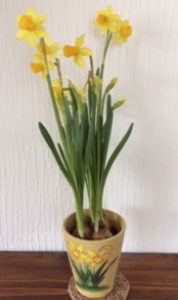 Spare a thought for all the potted Tete a Tete, often sold cheaply in supermarkets as an impulse buy (yes – me too) and often destined for a short life in a centrally heated house. Keep them as cool as possible and when they have finished flowering deadhead them, find a well drained spot in the garden and dig a hole sufficient in depth to allow coverage of two bulb depths of soil. Let them die back naturally keeping them well watered with a splash of high potash tomato feed. The display wont be quite so good next year but it will save them the indignity of the compost bin. 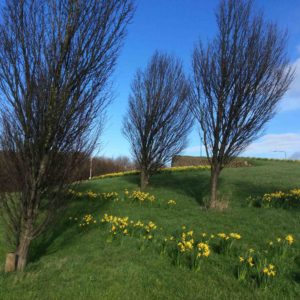 For those of a more hard hearted disposiition, more can be purchased in Autumn for flowering the following Spring. Over 600 hectares of Tete a Tete are grown in the Netherlands.
Click on images to enlarge

This entry was posted in Garden Daffodils. Bookmark the permalink.