The area around Dymock in Gloucestershire, including Newent and Kempley is known as the Daffodil Triangle or the Golden Triangle and used to be part of the wholesale daffodil trade.
There are still many areas of wild daffodils, especially in Dymock Woods. Maps of daffodil walks are available from the village store in Dymock. 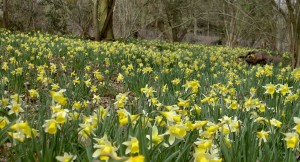 Each year during the daffodil season, the following villages serve afternoon tea for all the many visitors who come to see the flowers and the decorated village churches.
Here are the dates for 2013.

This entry was posted in Events, Wild Daffodils. Bookmark the permalink.