Since our first report forwarded on 28th January both the weather and
the daffodil sightings have picked up considerably. Our trip to Lires
and Cape Finisterre (Cabo Fisterra) took us along the coastal road
from our campsite near Ribeira, throgh picturesque fishing villages and
past golden sandy beaches. Being on a peninsula ourselves and having to
cross onto two other peninsulas to reach our destinations, we had to
negotiate several river estuaries. One of these was the beautiful Rio
Tambre which is one of the best river systems for finding N.cyclamineus,
in our opinion.

We got to Lires, which is about 20+ kilometres north of C.Finisterre,
where Brian, Wendy and James found N.cyclamineus almost growing on
the beach when they last visited here! We were slightly earlier than they
were and unfortunately, only managed to find one solitary early flower
of N.cyclamineus, but we did find Tulipa australis in flower in a meadow
just before the village! This plant seems to crop up everywhere we go
throughout Northern Spain – from East to West.

As we were in the area, we decided to take the opportunity to detour
down to Cape Finisterre, simply to see it and say we had gone as far
west on mainland Europe as it is possible to go. (A bit like John o’Groats
and Land’s End). However, on the tiny back roads that led from Lires to
the Cape, we did manage to spot a very large, vigorous form of
N.bulbocodium in two fields bordering the road. Unfortunately, being
in a rather large motorhome and no pull offs anywhere nearby, we
couldn’t stop to photograph them. Just one of the disadvantages of carrying
your house around with you. Never mind, we DID see them and Wendy and
James had also found a similarly large N.bulbocodium themselves on a
previous trip on the next peninsula down!

A few days later, (Feb 6th), we returned to the N.lagoi site near
Friol, where the flowers had really started to grow on strongly and
more of them. How they manage to survive in the cart tracks where
a lot of them were growing, is beyond me and yet we have found other
species growing in similar situations on numerous occasions!
The plants were now taking on the stature that suggested they were
certainly not the straightforward N.asturiensis. Whether they turn out
to be a tetraploid form of N.asturiensis as per var. villarvildensis we wait to see?
(leaf samples are being investigated by Ben Zonneveld as we speak!).

My Botanical Guide to Asturian Plants suggests that N.asturiensis var.
villarvildensis’ range stretches from the Serra d’Estrella in Portugal,
to Caceres, Central and Northern Spain and over to the Navarra region!
Which seems an extremely huge area for a variety to cover, without
having been recorded and named prior to the aforementioned
var. villarvildensis? Which of course it probably was, by Linnaeus, as N.
minor? 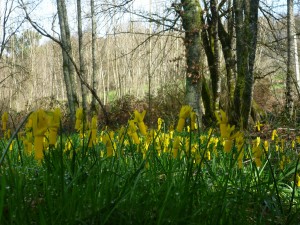 Friday, 15th Feb 2013, weatherwise, our warmest, sunniest day of our
trip so far and beaten only by the location of a meadow/field with
5,000+ N.cyclamineus in full sun and in full flower – what a magnificent
sight they were. Still a good few buds to open later together with
those under the shade of the streamside trees, hopefully, prolonging
the flowering for a few weeks longer so the later arriving party of Daffodil
Society members will have something to see in March? The GPS
reading for this location showed an elevation of 563 metres above sea
level! Who said this was a flower of the flatlands and low-lying
meadows. Also, not a twin-headed stem to be seen. But a further visit to the N.lagoi site revealed them now flowering under the trees and amongst the
thick brambles and on into the adjoining field and along the bankside of
the nearby stream. I doubt if they will still be in full flower by the
time Reg, Jackie and Gwynne arrive on 19th March, excepting for the odd
late flower that nature always seems to supply as a ‘catch all’ safety
measure? When we first found them 10/11 years ago it was about
20th March and there were only three flowers left! Fingers crossed! 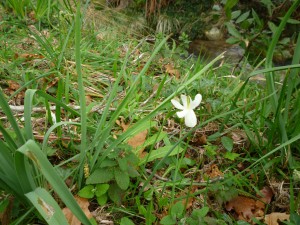 We also found N.bulbocodium coming into flower in a field just below
our campsite and we have just today (20th March) found a very white
form of N.triandrus coming into flower, also at the lower end of our
campsite. So things are really starting to move now!

I will send in a further report later as the season progresses, so
keep watching.

This entry was posted in Daffodil Hunting, Spain, Wild Daffodils. Bookmark the permalink.