At the Daffodil Society AGM in March 2018, two long-standing and well respected members became Vice Presidents.
The citation for their awards is printed below

Citation for Len Olive
In recognition of his outstanding contribution to our Society and the advancement of the genus narcissus.
A well respected member of the Executive Committee, mentor and exhibitor.
His involvement with daffodils has spanned over 40 years. As well as exhibiting he is the current co-ordinator of the Society Bulb Lottery, which he has done for a number of years. He is the Head judge responsible for mediating judging disputes to a successful conclusion at our two shows and an active member of the Classification and Technical Committee.
Thanks to his wise counselling at all levels, he has helped his peers to form The Daffodil Society into what it is today. 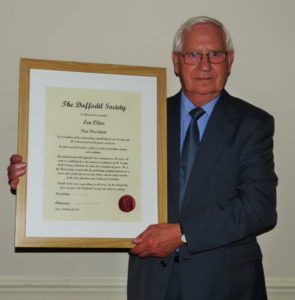 Citation for Alex Burke
In recognition for his input to the Society and the popularisation of the Narcissus in general for over 40 years.
By promoting the cultivation and exhibiting to local societies in the South of England throughout the eighties, initiating the start up of the Mid Southern Group of The Daffodil Society in 1988 of which he is a founder member and its first secretary which is a position he still holds today.
Due to his enthusiasm and dedication to the Group and help given to local societies and their members, he has acted as an ambassador to the aims of the Society “to promote the daffodil” which he has done at every opportunity.

A photo of Alex Burke will follow later in the year.