The Late Sandra Baxter – A Tribute 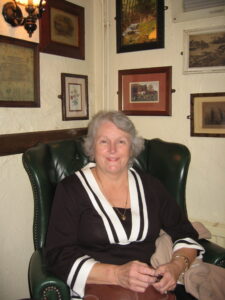 Sandra was born on the 5th of December 1945 at the White Heather Nursing Home in Southport. She went to the Tower Dene School until the age of 11, and then having passed her 11+, she went to the Southport High School for Girls. Her first job was with Williams Deacons Bank in Southport. In 1964, Sandra, her sister Kathie and their parents moved from Banks, Southport to live in Bengeo, Hertford. She married Michael on the 9th of July 1966 at St Stephen in the Banks with the reception being held at the Prince of Wales Hotel in Southport.
After their wedding, Sandra and Michael lived with Sandra’s parents in Bengeo. After the arrival of their daughter Tracy in 1967, they moved to Watton at Stone. In the few years after, came 2 sons Paul (in 1970) and Steven (in 1973). During their time in Watton at Stone, Sandra helped her mum Kathleen at her shop in Shenley, and also for Suchard Chocolates in Welwyn Garden City in the evenings.
When Steven was around 15 months old, the family moved to their current home in Birch Green. Sandra then went on to work at the Shell Petrol Station in Luton and after that she worked at the Esso petrol station in Hertford. In the meantime, Michael was working part time for Mrs Abel Smith which lead to Michael and Sandra becoming members of the South East Daffodil Society, and the Daffodil Society. This is where they made many friends from all over the world.
Sandra and Michael spent some happy times holidaying on cruise ships in Norway, St Petersburg, Egypt and Alaska. They also had some wonderful holidays in the Lake District. Sadly Sandra was not in the best of health after a fall in June 2017. This time also affected her mentally and emotionally after the sad passing of Tracy.
One of the happiest times in their married life was when their grandchildren arrived. Jonathon (in 1998), Jessica (in 1999), Jenny (in 2000), Eleanor (in 2002) and Jacob (in 2017). Sandra was incredibly proud of all of her grandchildren and always will be.
Michael would like to thank everyone for their sincerest condolences and many thoughtful cards he has received in the last few weeks. Also for attending the service today. He would also like to thank his family and friends for their support, especially his 5 grandchildren.
You are all welcome to join us at The Three Horseshoes, Hooks Cross, Watton at Stone after the service.

This entry was posted in People. Bookmark the permalink.