Some pictures of my first show of the season at Kirkham, Lancashire just north of Preston and not far from Blackpool.

The cold weather of the last week or three has held many of the daffodils back but a goodly number of early cultivars were on show and a couple of Div 6′s were outstanding so it was not surprising to fine a best bloom in Rapture 6 Y-Y grown by Peter Walker.

Other flowers of note were a vase  of Xit 3W-W judged to be the Best Vase of  Miniatures, also a nice bloom of Seagull 3W-YYO pre 1895  as the Best Historic Bloom.
Ian Tyler 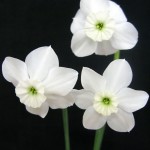