Reg Nicholl, Gwynne Davies and Jackie Petherbridge joined Jan and Lynne Dalton in Galicia and revisited many of the sites that Jan had reported on in his earlier posts.

N. cyclamineus were still plentiful around Ferreria and Corredoires and there were also an encouraging number of seed pods to indicate that the population was increasing steadily.
After heavy overnight rainfall we too walked along the River Tambre at Seguiero to see the last of the N. cyclamineus and were alarmed to see just how close to the waters edge they were.
Further heavy rainfall that night made us suspect that the bulbs we had seen  were by then floating down the river but with luck, coming to rest in a suitable spot to start a new colony.
N.  bulbocodium were emerging in the spring sunshine and we saw so many variations in size, colour and form in the fields we visited.
Some had terrifically long, strong stems especially in the well soaked and marshy fields in which they grew. One exceptionally long N. bulbocodium leaf was over 2 foot long.
We were delighted to see N. lagoi amongst the bracken at the well known old mill site and marvelled at the size differences in some of the flowers. Many of the flowers that we saw during our stay had to push their way through tough grass, coarse bracken and copious water.

There were also other dangers. We had just photographed and admired a field of N. cyclamineus and emerging N. bulbocodium and wandered further along the road
to see what else we could find.
When we returned a short time later we were aghast to see the field filled with cows and the sound of large tongues wrapping themselves around the dainty flowers and leaves
and contented munching.
We feared for the two flowers of a particularly short dumpy form of N cyclamineus that we had found here and in one other field the previous day.

Left to our own devices, on a wet day, we went from our hotel in Arzua to Lugo for a spot of culture. En route we couldn’t help but look out of the car window at every river and stream that we passed for a tell tale hint of yellow.
One spot looked promising so on our return, by now in dry weather, we stopped east of Mehides and strolled down to the river. As we passed a field we spotted N. bulbocodium
but no sign of the flower on the riverbank that we thought we had seen from the car. Single flowers of young gorse can be very misleading.
Following a path under the road we accompanied the river to a picnic area and found, to our delight, a healthy population of N. bulbocodium amongst the puddles.
The river led to a weir and an outdoor summer lido and cafe so curious, we decided to explore a little further.
What luck! More N. lagoi and N cyclamineus and also more N. bulbocodium. There was also a tantalising glimpse across the water of a possible pseudonarcissus siting
but the view through the binoculars was uncertain and next day we thought it more likely to be an early hybrid. Returning to the car and turning onto the main road
well pleased with ourselves, we glanced to our right and saw that we had missed two huge meadows of N. bulbocodium! We resolved to return and explore further next day with Lynne and Jan.

Jan was impressed with our finds and we saw more N. bulbocodium  were growing in field entrances between houses and indeed in many of the surrounding fields
some in peril of being grazed by horses. Our meadows of N bulbocodium were magnificent and more than made up for the fields Jan had taken us to towards  Xia,
now empty and well grazed, whereas ten years ago they were a mass of yellow. These N.  bulbocodium were also varied but definitely shorter, more consistent and  refined than those on the way to Ferreria.
We saw no N. triandrus other than three stems Jan had picked from his campsite to show us but did see from afar a strip in a front garden with a motley assortment of neglected flowers including a strong growing Jonquil, an old double and pseudonarcissus. And yes, the ubiquitous Ice Follies was also spotted. Where would we be without it.
Our thanks to Jan and Lynne for being such good guides and for training us so well in the art of high speed daffodil hunting.
We look forward to hearing of the next stage of their travels as they head for the Picos. 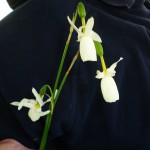 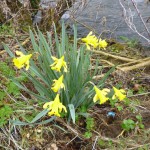 Early hybrid by the river? 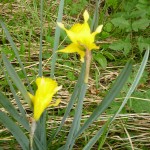 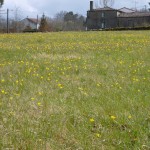 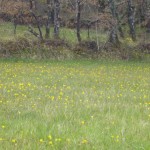 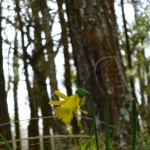 N. lagoi in the copse 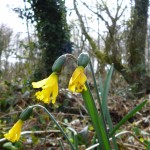 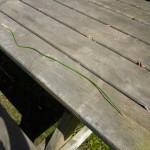 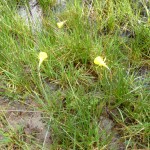 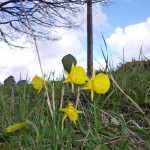 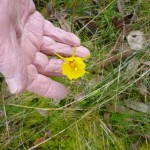 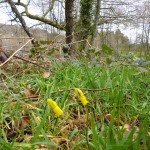 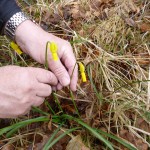 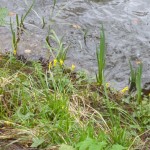 River Tambre – very close to being washed away 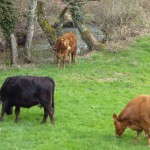 Aaagh. Who let the cows in! 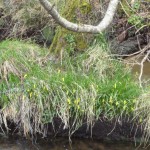 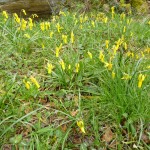 This entry was posted in Spain, Wild Daffodils. Bookmark the permalink.

One Response to More from Galicia